Home - Experiment - The Man and the Traffic: The Final Volume
AdultCreativesDatingPushStatisticsTrafficVerticals
Author: ZorbasMedia

The Man and the Traffic: The Final Volume

Hi there! This is the editorial team speaking. Our special project “The Man and the Traffic” is coming to an end. After over half a year of running traffic, Oleg has come a long and thorny way from an absolute newbie to a run-of-the-mill affiliate, so to speak. Although he didn’t become a top or generated a huge ROI, he gained new knowledge and experience, which is a valuable thing in itself.

Now, the Man is going to tell you what lessons he learned after half a year of working with traffic and what his plans for the year to come are.

Oleg, we give the floor to you.

The Christmas eve is drawing closer with each passing day. Everyone is looking forward to the festivities and anticipating the busy and bustling home atmosphere when all family members are gathering around the festive table, the fragrance of pine needles and tangerines is permeating the air and you can’t stop thinking about what you will find under the Christmas tree.

By the way, do you believe that Santa Claus can fulfill your wishes? I do, as it has happened to me before, and not once. So, I’ll ask Santa Claus to… no, I can’t say it out loud or my wish won’t come true.

Well, let’s get down to business. Today we’re publishing the final volume of our experiment “The Man and the Traffic”. It’s time to take stock of everything I have been doing over half a year and assess my successes and failures. This is exactly what I’m going to discuss below. 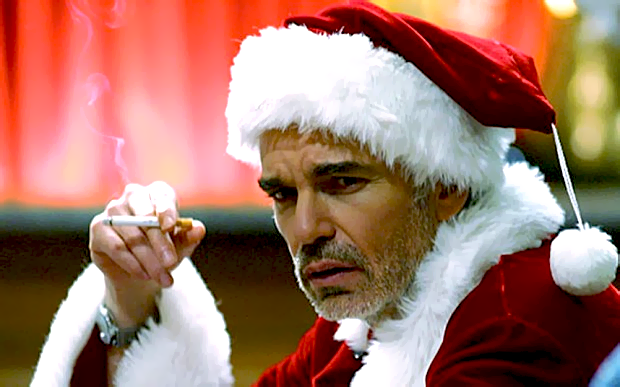 The experiment was launched on June 25, 2019 (here’s the link to the very first volume):

“ZorbasMedia will provide Oleg with $2000. He is willing to put the time and effort and allocate 2 hours of his time to driving traffic and working on campaigns. Everyday. No excuses…”

Initially, I opted for driving push traffic to dating. All offers were provided by affiliate network ClickDealer, and my affiliate manager helped me to handpick the best ones (the network’s support team knows their job perfectly). 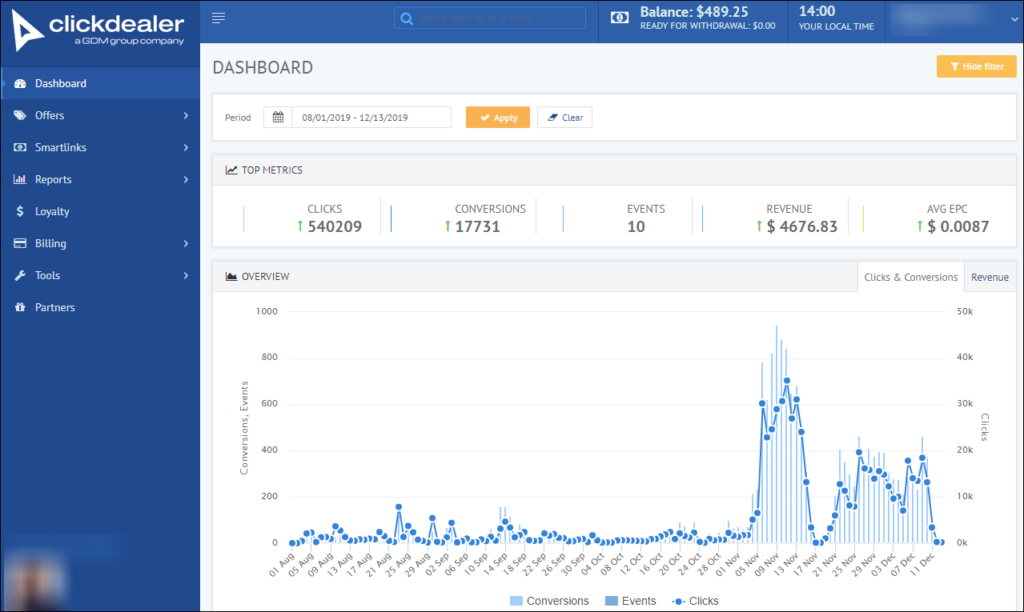 I worked with SOI offers, as it’s probably the best option for starters: a conversion is generated the moment the user enters their data to register on the website.

I also used Binom Tracker and spy tool Anstrex where you can find some of my creatives: 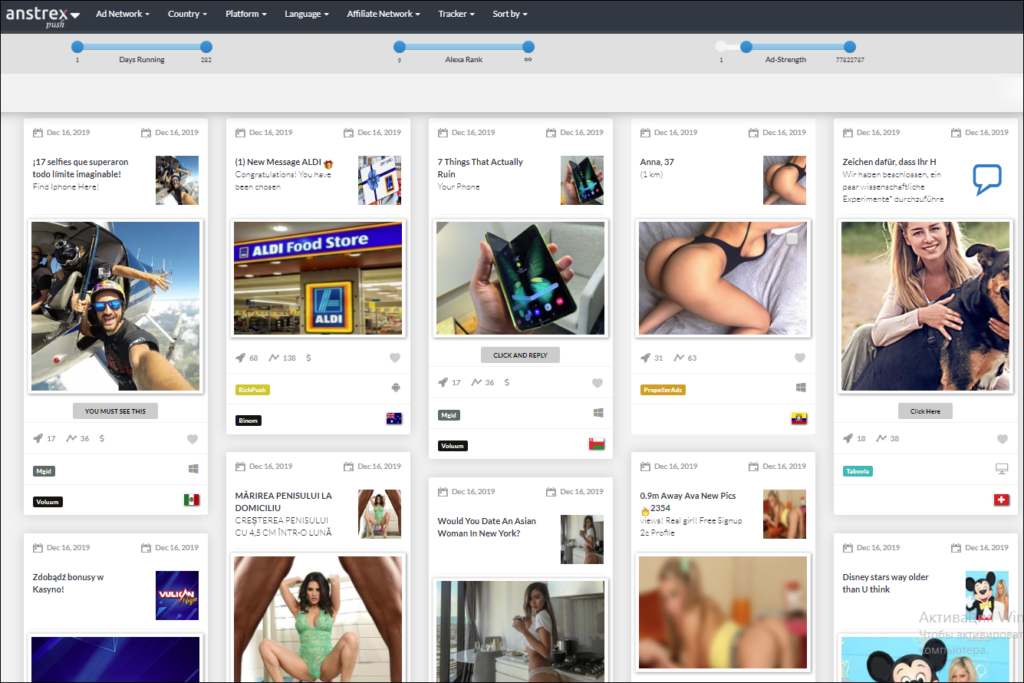 Since the project began six months ago, I have gone all the way from installing the tracker to launching 10 campaigns at a time. Overall, I have launched 715 ad campaigns. On the screenshot below, you can see the most successful ones:

My first campaigns plunged into the red: mistakes made due to the lack of experience and attention didn’t allow me to stay above the break-even point at first. I drove push traffic from two ad networks: PropellerAds and MegaPush. 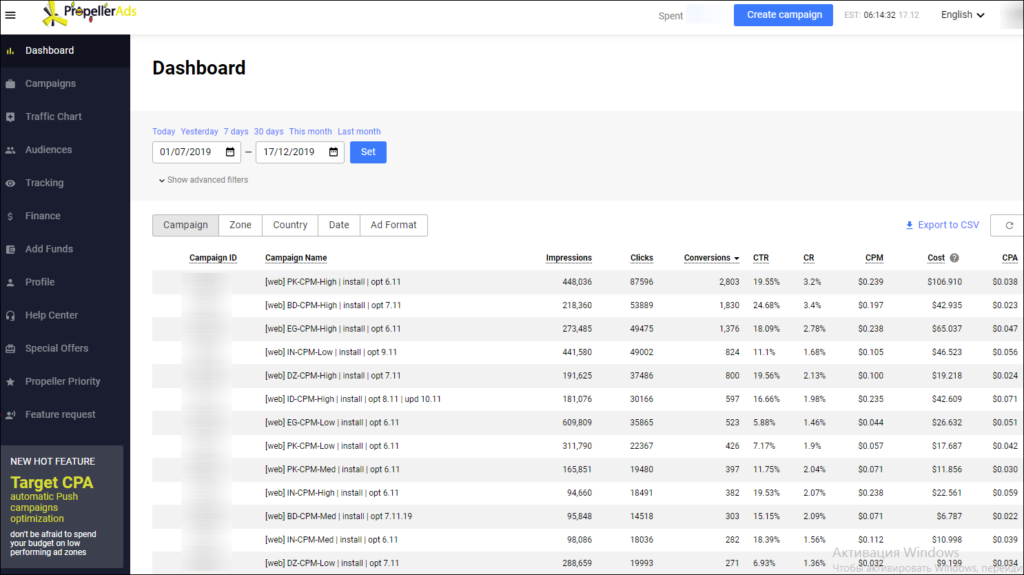 By the end of the project, I worked only with PropellerAds, as I didn’t have enough experience to run profitable campaigns with MegaPush, although this network has huge traffic volumes. 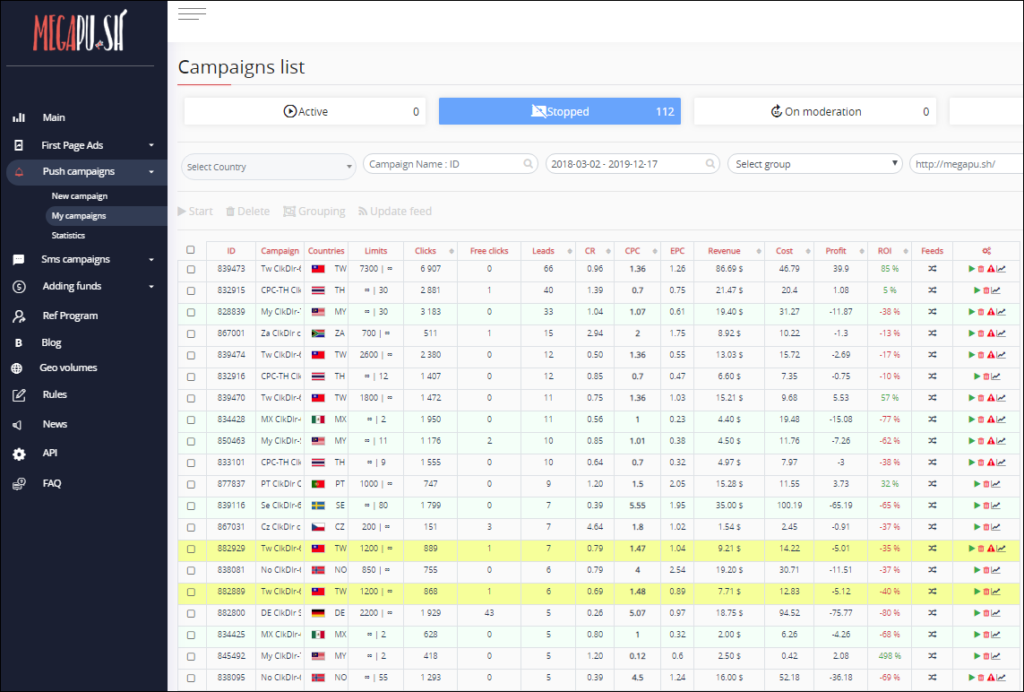 My overall balance is still negative but it’s steadily climbing into the green zone. My average ROI is now 20% — there is still room for improvement. It should also be taken into account that the overall ROI is going to be even lower because of some hidden payments and commissions.

I spent about 360 hours on affiliate marketing, which is not that much. It’s actually 9 and a half weeks or two working months. The same results can be reached within a shorter time period. Given the willingness and opportunity, one month dedicated to running push campaigns will be quite enough, as push is probably the simplest and most affordable traffic type to start your affiliate career.

I drove traffic not only to dating offers but also to installs and sweepstakes. France, South Africa and Malaysia turned out to be the most effective geos for dating, while Germany was the best geo for sweeps.

In the run-up to Christmas, affiliates working with Europe focus on sweepstakes. I will also continue to drive traffic to dating because it’s an evergreen niche. As for installs, I’m going to take a break, as I need to analyze my ad campaigns and optimize geo-targeting.

In the future, I’m going to try out and test new traffic sources: alongside push traffic, I will also work with native ads. I’m also planning to try new verticals and also start driving traffic to smartlinks.

Tips for those willing to start their career in affiliate marketing

Contact me if you have any questions on push traffic, I will be glad to help to the best of my ability. See you next year and may the green ROI! 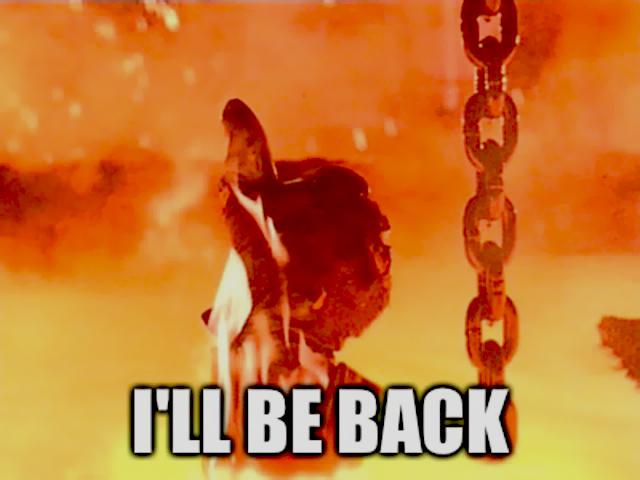 Hi everyone!   A couple of months have passed since I shared the results of my campaigns. Running...
Read More
51
0
https://zorbasmedia.com/the-man-and-the-traffic-season-2-0-promoting-nutra-dating-and-physical-products/
Copy link Facebook VK Twitter Telegram

Salam məniməziz dostum — this is how we would like to greet our readers in the second part of our...
Read More
15
0
https://zorbasmedia.com/gamblingincis2/
Copy link Facebook VK Twitter Telegram