Dating niche is the bread and butter of the affiliate marketing, which adapts new trends and tendencies more out of new traffic sources, than out of methods and approaches changes. Yet, even dating can surprise you. How you ask? Brace yourself.

Tier-1 is widely considered to be the most profitable GEO, one should focus on. Indeed, it brings large payouts and competition, leaving the audience inert and exhausted. Meanwhile, the core Europe performs well consistently. So well, in fact, that AdsEmpire team has analyzed top-3 locations based on the vast experience of data with locations. Below are the exact examples and tips on how to profit on the best locations: which social networks are the most popular, which language is free from barriers, the best regions, age, devices that are to be targeted. Furthermore, we have added the most converting offers at the exact locations.

Belgium is an integral part of the BENELUX community.

This is a multilingual location. Flanders, the northern part of the country, speaks Dutch, while Wallonia in the south prefers French. Belgian east is known for a large German-speaking community.

The highest conversion belongs to Dutch-speaking segments, and spending is higher for Flemish and Dutch languages.

Age. 36 y.o. is your best bet for the best conversion, but the largest receipt belongs to the 51+ segment.

Social networks. 83% of Belgians use social nets and 62% does so on a daily basis.

As of March 2022, there were about 5.4 million Instagram users, which contributes to about 45.5% of the total population.

Austria is a small country, capable of incredible spending with the population of just 10 million, judging by the volume of purchases made in other countries.

Language. English and German speakers maintain the parity in terms of conversion, but the Germans hold the edge in average receipt size and lifetime value (LTV).

Age. The most converting segment is 36+ audience; the same audience delivers the highest receipts and LTV.

Regions. Throughout Austria, the conversion rate and receipt are more or less equal with occasional breakthrough from Burgenland, Carinthia, Salzburg for the highest conversion.

Social networks. In total, about 88% of the Austrians use the internet daily.

Facebook with its market share of 62% maintains its crown as the most used social network portal (around 5.27 million of users). Almost half the Facebook users are 35+ in Austria nowadays.

In 2022 Instagram enjoyed around 3.15 million users from Austria. This is a third of the population. The online service has more than tripled its user base in Austria since 2017 and has made a name for itself as the leading social network after Facebook. Age segregation highlights that social networks are visited more frequently by the people ranging from 18 to 34 y.o.

In total, there are 5.8 million users, with 66% watching the videos on YouTube. Twitter remains a niche network in Austria.

WhatsApp is installed on 88% of all the smartphones in Austria. Over 6.3 million users of all generations use this messenger regularly.

The percentage of the users visiting social networks daily and actively equals 37%.

Dating-sites popularity. 6.8% of the Austrians rely on online dating platforms. The number of couples originated online has doubled for the last 4 years. In 2021 its share has been confirmed to reach 43% mark. Men are the obvious majority on the Austrian online-dating market. Around 76% of the Austrians on the dating portals are men. Women make just a quarter of all the users.

The Netherlands is the second part of the already mentioned BENELUX.

The Netherlands is populated with two groups of indigenous people: the Dutch and the Frisians, as well as many immigrants. The official language is Dutch, which is the main language for the majority of inhabitants. The Netherlands has a long-standing custom of studying the foreign languages, captured in the Dutch laws of education. Approximately 90% of the population speaks English, 70% handles German, and 29% possesses French.

Age. The top-converting segment is 26-35 audience, followed by 36+ segment.

Social networks. WhatsApp and Facebook are among the most used networks in the Netherlands. Both have the highest number of daily users. These nets are actively used every day. WhatsApp outpaces Facebook with 12 million Dutch users versus 10 million for the latter.

Dating-sites popularity. In total, one out of five Dutches has a profile on a dating site. As expected, the young generation is more fluent at navigating the dating apps than the elders. Among 65+ Dutches only 4% has the experience of acquainting online.

Intrested in testing one of the locations – write to Victoria on Telegram @viktoriiaAE or live:.cid.6051636583a41b6f or, better yet, register yourself.

Plus, autumn is a good time for harvesting, especially if the yields can be doubled! To do so, AdsEmpire has launched a two-month-long contest: by simply increasing the traffic volume, everyone can get some extra cash. Once a month you can earn up to $7,500 bonus. The terms are simple, learn more about here. The contest takes place from the 1st of October to the 30th of November. 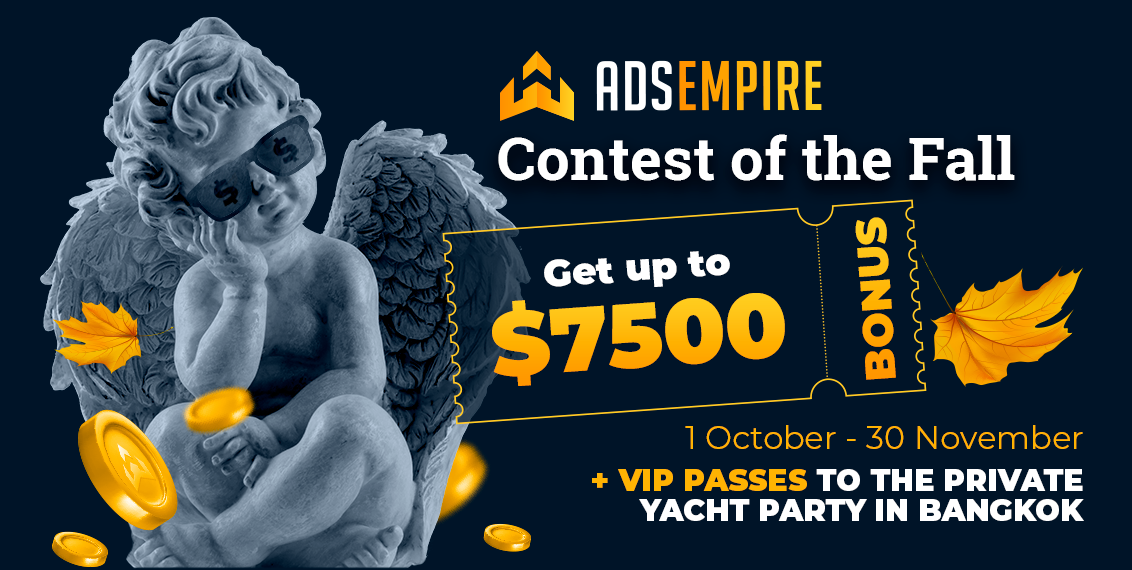 Additionally, contest participants have a chance to win 1 out of 10 tickets to the private party by AdsEmpire in Bangkok, that is a sub-event of the superb AWA conference there.