ABC Apps
1.0
Founded in: 2020
AppsServices
ABC Apps is an automated platform for purchasing and renting WebView applications for Android that will be a good match for any traffic source within the betting and gambling verticals. All major languages are integrated into the apps on Google Play, so it is possible to drive traffic from any GEO. A dedicated manager is in touch 24/7 and ready to help with any issues regarding traffic arbitration.
Website 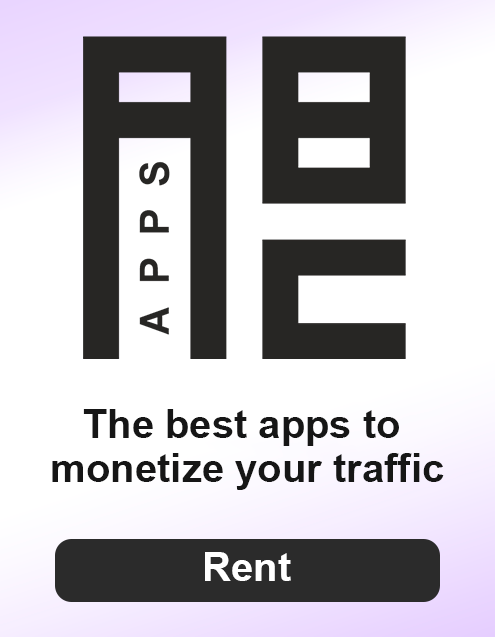 ABC Apps is a platform for renting and buying WebView apps that work with any GEO and traffic source. ABC Apps provides extensive technical support and swift replacement of banned apps. It’s also possible to order a custom application.

The ABC Team entered the market at the beginning of 2021 and unraveled full-fledged operations in 2022. Previously, ABC Team was focused on developing apps for their own media buying team which specializes in betting and gambling verticals.

Now ABC Apps is going public, and the team is open to suggestions for adding various features to the platform, including integration with trackers.

At the launch stage, the team has a promotion for clients: free apps for testing. Contact the team’s manager to learn more about the offer and get the app. The offer is limited, don’t waste the opportunity!

To rent or buy an app, a client needs to contact the manager of the platform on Telegram.

All the communication and integration of apps are carried out via a chat with the support manager. A client needs to describe what application they need, for which traffic sources and GEO, and the manager will select the most suitable option and answer all questions related to the product.

A traffic feed is created in the admin panel. After that, the client receives the app naming for their advertising campaign.

On the page with traffic feeds, the client can also see the number of installs, registrations, deposits, and the ratio of I2R, R2D, and I2D.

Further integration process depends on the traffic source. For example, when driving traffic from Facebook, clients can share the app to their accounts via the bot. Most of the sources are integrated through the support manager.

After integration, the client can immediately launch an ad campaign.

If you purchase an app, you will see such options as regular push and smart-push notifications in the admin panel.

Regular push notifications are sent to all users simultaneously 2 times a day (within the same time zone and language category).

In the case of smart-push, the client selects the category of users who will receive a notification depending on their actions, for example:

With ABC Apps, you can either rent or buy applications.

Renting — $0.08 per install. An install is defined as the opening of an installed app by the user. If the user did install but did not open the app, you will not be charged for these installations.

The purchase/rental price includes access to the app in the admin panel and the bot, where you can create a naming stream with the app, as well as access to push notifications and full technical support with quick replacement of apps in case of a ban.

Individually, discounts and special offers can be provided for large teams and trusted partners. If a client needs to customize the application, it will not be possible to change the design of the product already uploaded to the store. However, the client can always order an app with a special design, for example, for a specific offer. The cost in this case depends on the complexity of the task. You can talk all the details over with the manager on Telegram.

The issue of traffic loss, when instead of being tracked by naming the traffic is seen as organic, is always relevant for affiliates. ABC Apps built a system that minimizes traffic losses: apps do not crash, and the server is stable. However, losses can occur, for example, due to connection problems between AppsFlyer and Google. When they appear, the ABC Team meets the client’s needs and promptly solves the issue.

We’ve used applications from ABC Apps for FB campaigns, and we had good results with them. Tech-wise, everything works perfectly. The sharing is very convenient, and the lifespan of the apps is nice. The service is of high quality and fast. Recommended!

Hi everyone! Our friends from Ukraine recommended the ABC team to us, and we did not regret coming here. We needed apps for certain GEOs with a special design.

In general, all our needs were met perfectly with ABC Apps. I would also note that these guys are very consistent in their communication and provide useful info. Everything is excellent: transparent and automated. Another good thing is that the guys can make a completely customized app according to the design you need! In general, it’s 5 stars. I recommend working with ABC Apps =)

We’ve been working with ABC Apps for a long time, probably since they were not public.

We mainly work in Tier-3 GEO. I like that the guys respond very quickly to requests or solve technical issues. Their apps live on average longer than many others, and if they get banned — the team quickly replaces them. There has never been any traffic stoppage for more than a couple of hours. The technical integration is very cool — a convenient admin panel and everything is simple and clear. The apps engage users well and bring a good audience. Thank you for your work!

We have rented apps from ABC Apps.

We worked with such GEOs as BR, UZ, AZ, and TR. The apps showed a decent performance. Some of them have brought 1.5-2 times more registrations than other apps. We can also see that this team works on the quality of the audience and pay attention to reviews. Recommend this team =)

ABC Apps is a platform where you can purchase or rent WebView apps for Android for traffic from any source and any GEO. The main available verticals are gambling and betting. The ABC Apps team offers round-the-clock support and customization of applications according to your needs, as well as a quick replacement of banned apps.